Aridity strikes me upon first entering into the furtive, literally underground, art gallery.  I shouldn’t be too surprised though, since the location of this gala was imparted to me through sideways glances and hushed whispers.  This is one of the last places to go to in Madrid that has not been industrialized nor soiled by heavy tourism.  This is the real, seedy, creatively prosperous Madrid.

Finding the massive gray door was surprisingly a challenge since it’s placed in a location that goes unnoticed in plain sight — comparative to one of the many same-colored doors in Manhattan that most people tend to walk by without a glance, unless you are a resident, of course.  I was fortunate that the door was unlocked and unbarred, for I had been forewarned that the location is closed off occasionally.  The aridity of the plain manila walls upon entrance  was underwhelming.  The room was host to a barrage of embattled and tattered clothing that had been donated and strewed across white racks, white tables, and the dirty, white tiled floor.  I had walked into an alcove of secondhand treasures and I kept on briskly walking past it.  Today was not the day that I was to grapple with a Madrileño over a torn t-shirt; nein!

After ascending a small flight of stairs, I was greeted by sticker-ridden dividers that separated the two rooms.  Sucking in one last breath of air, I pushed aside the flaps.  The succeeding room opened up into a dark, damp, abandoned space.  Graffiti marked all available space, exactly what I had been promised.  The word ‘graffiti’ doesn’t do the markings and murals any justice however — this was true art.  There were depictions of a swimmer performing front strokes around the circumference of the room fused with bright, vibrant clothing squeezed together to emulate faces reminiscent of a Picasso painting.  I was astounded and awed, standing stolidly in the center of the room, swiveling my body in a perfect circle to soak in the view.  Banners of black and white tags littered the ceiling, carving a path to the dilapidated stage in the back of the room.  I didn’t dare hop on stage and perform a little jig, but I sure-as-hell felt like moving.  And moving I did, at least, moving down the ramp and into the basement. clothes constructed into a face

The basement broke off into two different pathways; one veering left, the other veering right.  I chose the right path since I could see around the corner.  Every inch of these walls were demarcated with vivid paintings, bold fills, and dark, counterculture themes.  Fluorescent lights cast spotlights onto the artwork, leaving me to slink through the shadowy middle of the lane.  The archaic lanes resembled the labyrinthine maze of Ancient Greece.  I half-expected to walk upon a rampaging minotaur!  I was in luck since no minotaurs were found, but I did stumble upon a rampaging garage band at a dead-end in the puzzle.  The music was blaring in their neon-orange lit room that was tucked away in the back of the maze.  I listened to their jam session for a few minutes and then continued my trek through the labyrinth. 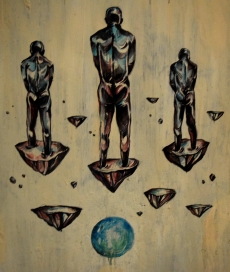 Weaving my way through room after room, I came across an entrance to the outer walls of the building: the courtyard.  It was drizzling, but that didn’t stop me from going out to explore the hidden gems in the massive backyard.  Larger-than-life murals were painted on walls and garages alike, but what stuck out to me the most was the verdurous garden growing in the back of the backyard.  A substantial amount of plants had apparently been growing for sometime now, leading me to conjecture that it is a community garden.  I wandered through the brush and then sauntered over to an entrance of a gloomy building.

Inside, I was greeted by a saturnine fellow perched on a rickety white lawn chair.  I said my courtesies and then proceeded to snap some shots of the spacious room, which I believe was previously a gymnastics gymnasium.  This proved difficult and uncomfortable though.  Difficulty lay in the dismal amount of lighting; uncomfortableness resided in the frosty, unrelenting stare of the pseudo-bouncer in the chair.  After getting a shot that I was OK with, I gathered myself and briskly walked into the room at the end of the building.

PSA: If you ever feel uncomfortable because of the presence of a mysterious, shady character, NEVER, I repeat, NEVER walk into a room that only has one exit.

Lime green pillars trickled down to meet the burgundy floor, all cast in a late afternoon shadow provided by the slitted window.  It is an eerie experience, a seemingly haunted room.  I’m relieved to find that it is still in use, ghosts or not, when a squadron of dancers enter moments later.  The space is apparently used as a dance studio, to my utter surprise.  I vacate the premise due to the fact that I had left my ballerina pumps back at my apartment. 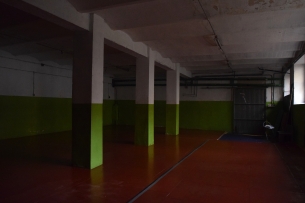 Back of the building 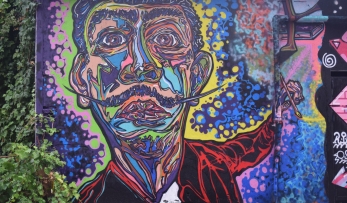 Psychedelic Mural in the courtyard

The sun began to set outside, thus sparking the desire to find my way out of this maze.  The murals twisted and turned, my vertigo spinning with each bend.  I came across a myriad of dilapidated rooms, all of which were in use.  I walked into an art studio, where creatives were hard at work constructing prints on an elongated mahogany table; a recording studio, where Senegalese were blasting reggae, dancing away their troubles (and the smoke); a bathroom, where the toilet was indistinguishable from what went inside of it.  All of this warrants a certain attention that I happily doled out.  Now that I was lost in the labyrinth again, all sense of time withered, as well as my aforementioned panic. After what felt like an eternity, I came across the entrance from whence I came, and reemerged into the dank, dark room.  I peered around one last time, and then stole my farewells with me back out onto the streets.  Outside, it was as dark as it was underground, although bereft of all the amazing art that I had just witnessed.